Skip to content
There has been a lot of talk about a FED Rate hike possibly by 25 bps and its effects on the Indian markets. There may be some impact for a few days but history says that there has been no major impact on the Indian stock markets as evident from the chart below. 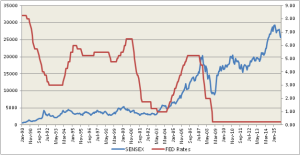 The year of the bull-2017
Sabyasachi Paul has been associated with equity research and advisory on equity markets in India for over 9 years & currently heads the equity research desk of Eastern Financiers Ltd, Kolkata.He also manages a portfolio on the online platform Kristal. Find link to the strategy named ‘The Tortoise’
Tweet
Share
Share

This site uses Akismet to reduce spam. Learn how your comment data is processed.